Marathons route through Lake View:
The Horseless Carriage Race of 1895
The race was routed through the new District of Lake View
(The City of Lake View was annexed in 1889) 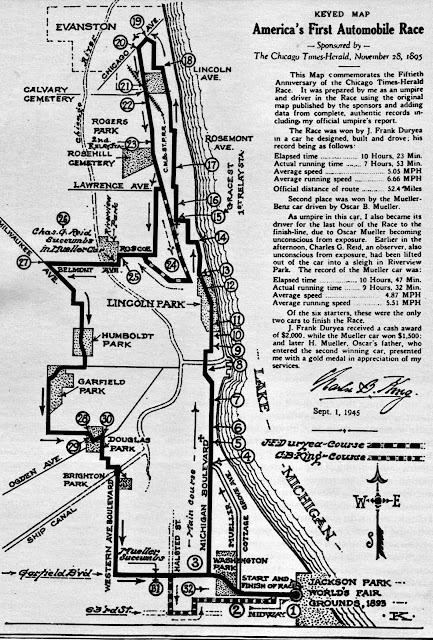 Route of the Chicago Automobile Race 1895
The ‘horseless carriages’ didn't receive much notoriety until the Chicago Times-Herald offered $5,000 in prizes to the winner of a round-trip race between Chicago (through the District of Lake View) and Evanston  - two years later. The race attracted considerable attention because only two cars were able to finish despite the fact that a snow storm had deposited a foot of snow on the Chicago area two days earlier. The article below helps tell the story.
(enlarge image to view) 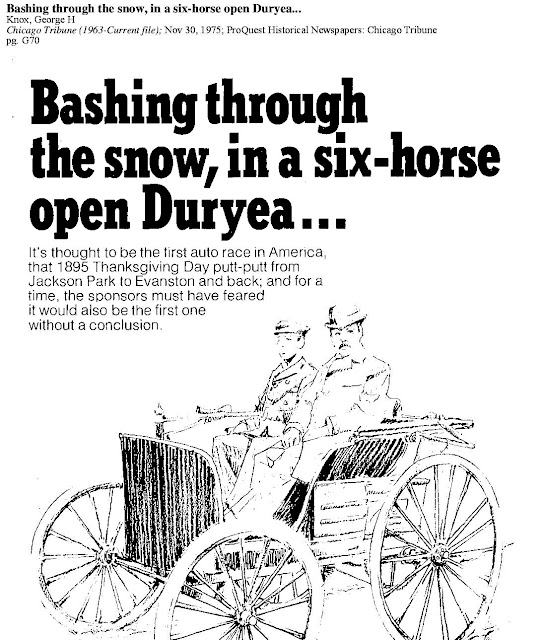 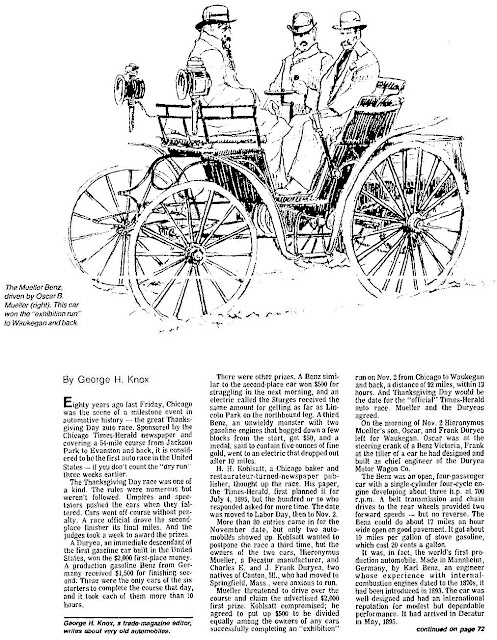 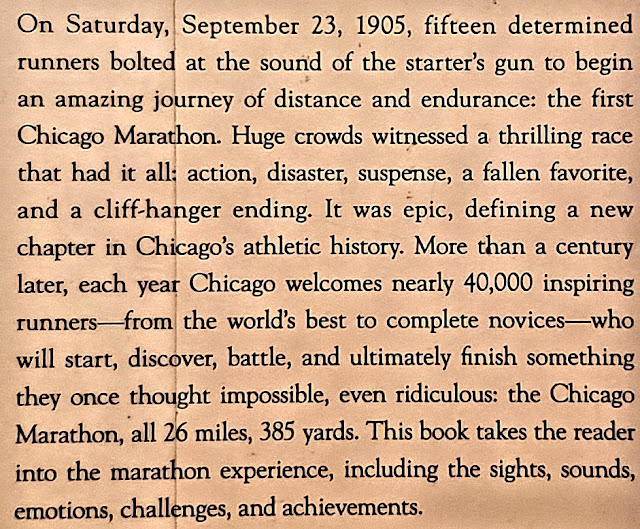 image from a book called Chicago Marathon - back cover 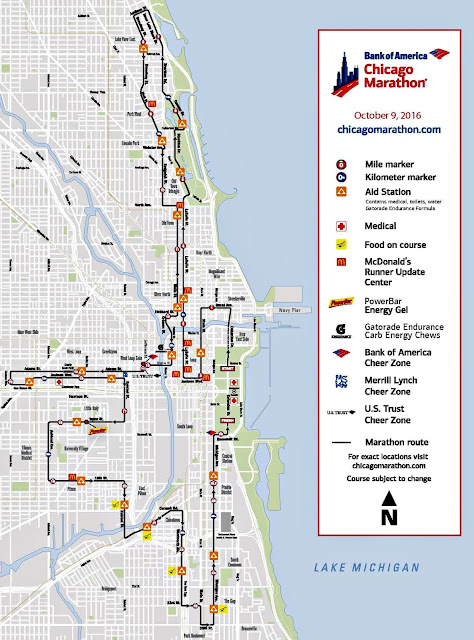 below image within Lake View 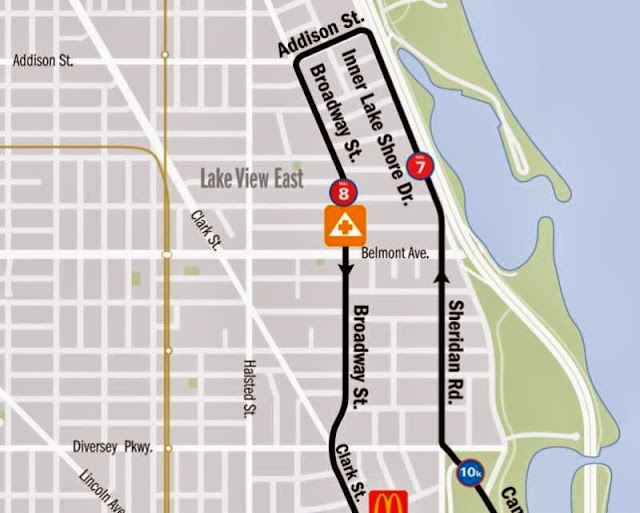 In 1977 the first mega-race in Chicago was established with the financial support of the Ravenswood Bank. It was called the Lakefront 10-Mile Run. The race was a great success, with over 1,000 runners participating. It was thought that Chicago's mainly flat terrain the race is a great testing ground for more hilly terrains of the East Coast. The race was referred to as The Mayor Daley Race (the first one) until LaSalle Bank became the sponsor.
Michael Bilandic, Chicago’s new mayor as of 1978, and an avid runner, was invited to the event along with his wife who distribute awards to winners. With the mayor’s approval and overwhelming city-wide support the Chicago Marathon’s  founders, who weren’t quite sure if a marathon could succeed in Chicago, got the inspiration they needed to make the city’s first 26.2-mile road race a reality gaining national attention. Currently, the Chicago Marathon draws world recognition and worldwide athletic participation. In 2008 Bank of America took on the role of sponsor.
According to Wikipedia the first Chicago race was held in 1905 from Evanston to Washington Park.
The Route in 1977
The route appeared to be north along Broadway Avenue
and south along Lake Shore Drive
(click to enlarge article) 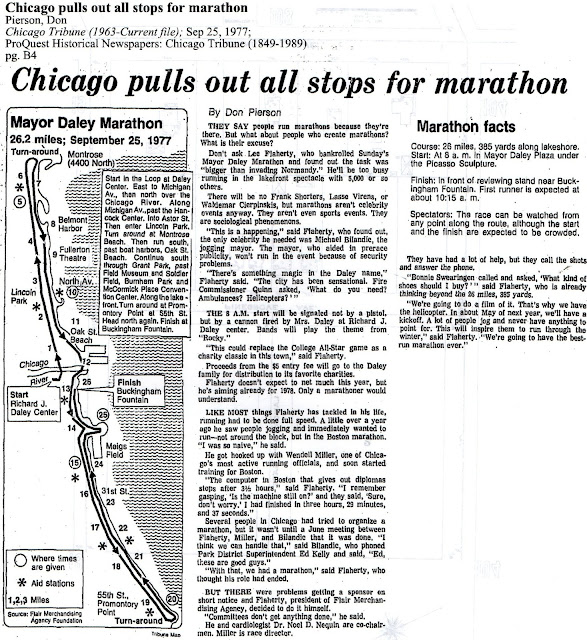 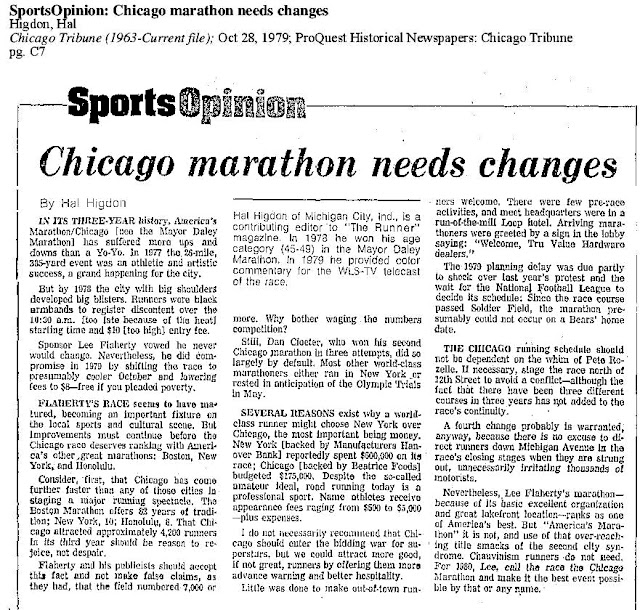 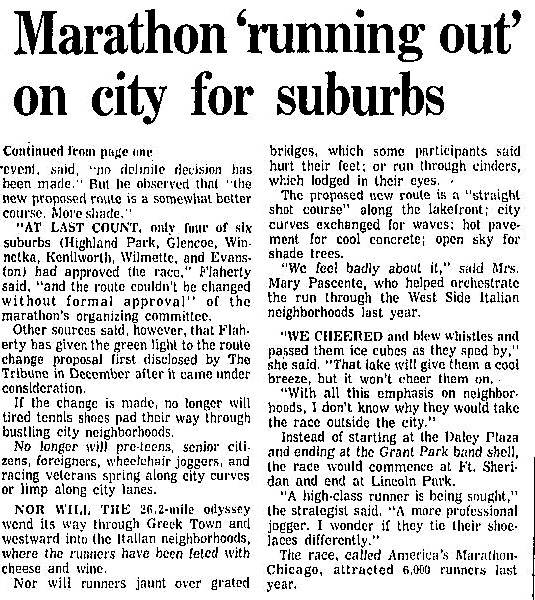 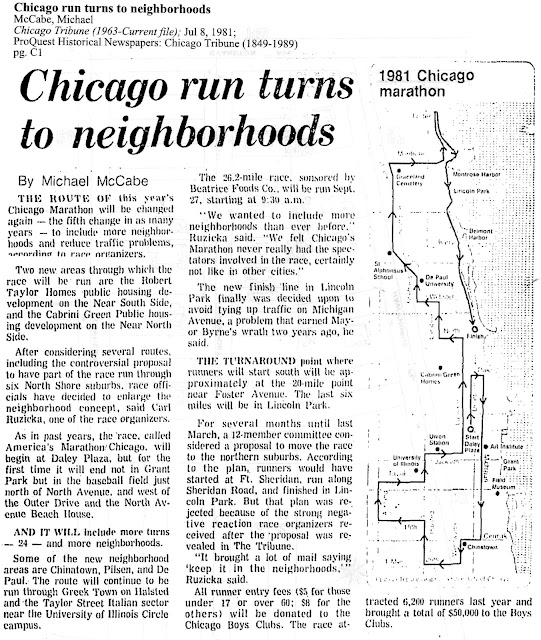 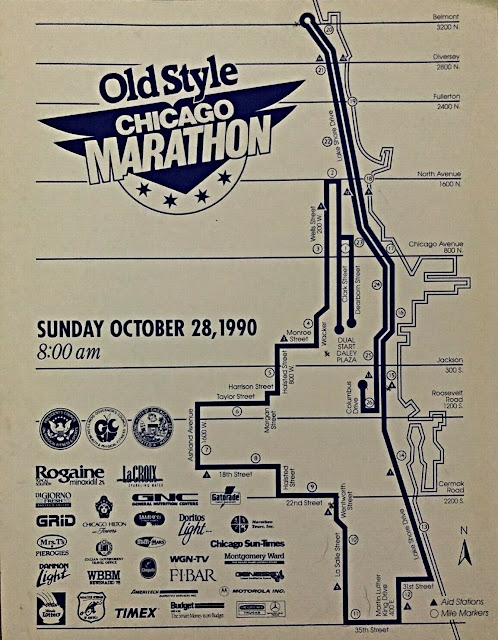 and turned on Belmont Avenue 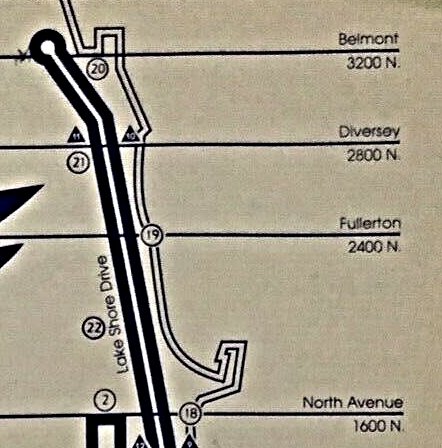 The Marathon Joins the Pack in 2006
The LaSalle Bank Chicago Marathon altered the world view of the marathon by aligning itself with four other races that equal its prestige: the Boston, Flora London, BMW Berlin and ING New York marathons. This allegiance of five created the World Marathon Majors – a series of qualifying competitions that will award a total $1 million to be split equally between the top male and female marathoner each year. The groundbreaking move is the first of its kind in the sport and is paving the way toward raising awareness for its athletes and the sport overall.
A New Sponsor 2008

With Bank of America at the helm as the new title sponsor, and Nike as the new footwear and merchandise sponsor, the 2008 race attracted 45,000 participants and closed registration in less than three months. With another year of hot temperatures predicted on race day almost 33,000 runners started the race and 31,344 recorded official finish times. 2008 witnessed several new changes, including a separate start for the men’s and women’s elite field (starting five minutes before the Open field), an increase in Aid Stations from 15 to 20 and the first-ever hand cycle division as the Bank of America Chicago Marathon welcomed the Achilles Freedom Team of Wounded Veterans into the field.
Sights & Scenes along Broadway 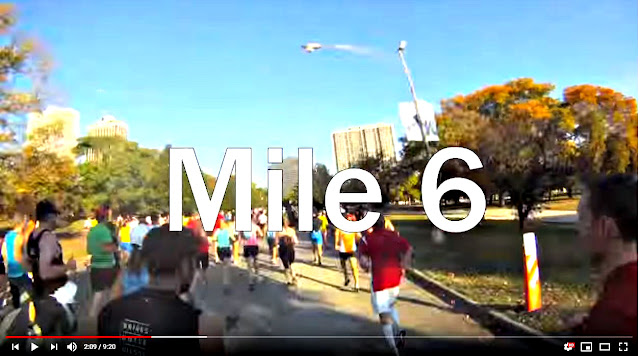 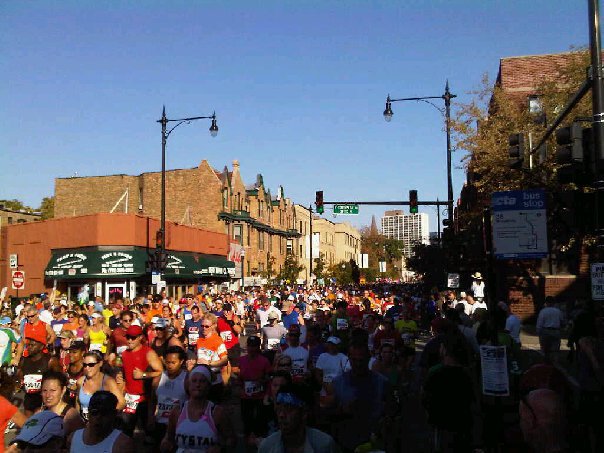 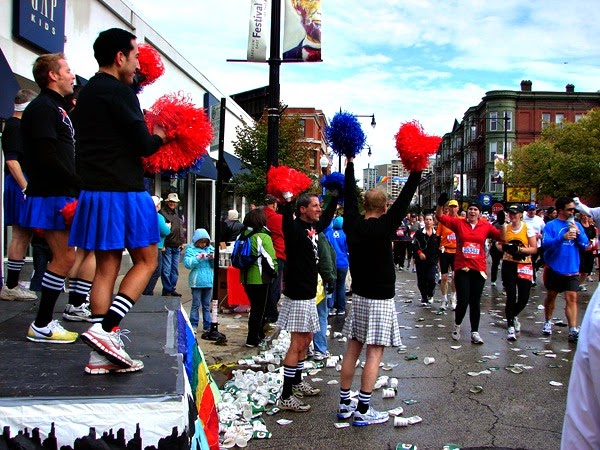 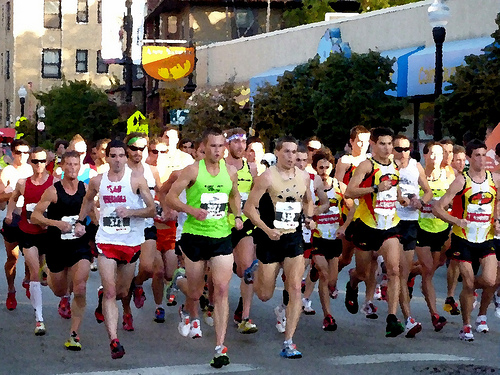 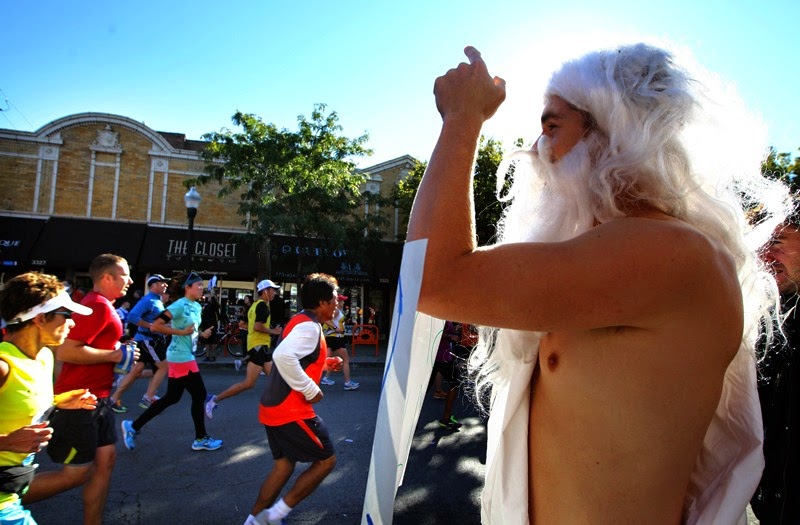 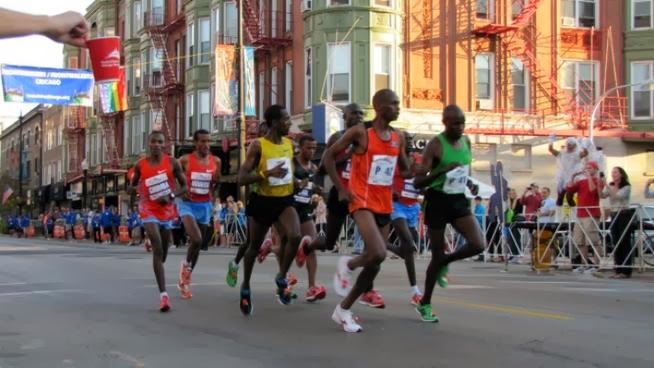 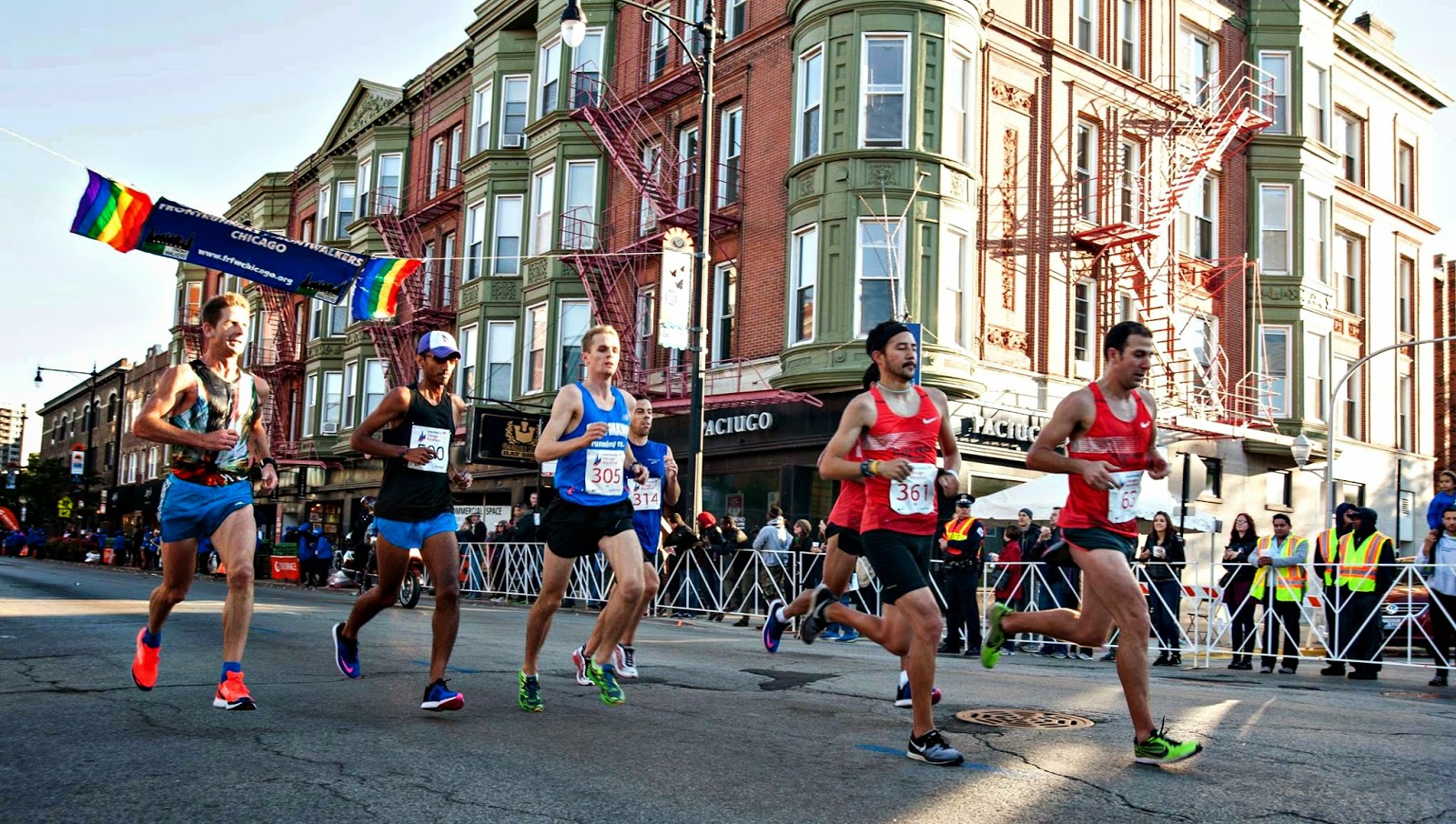 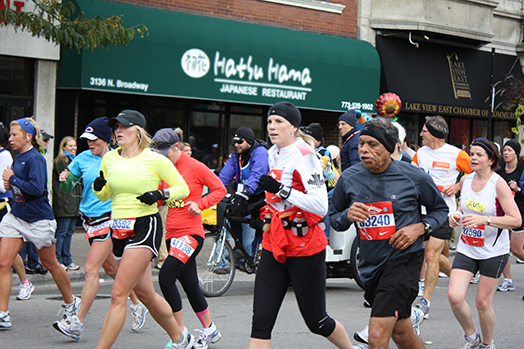 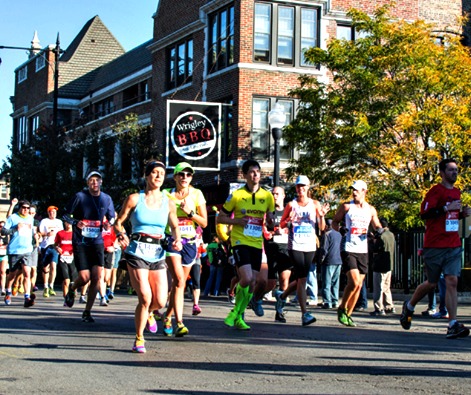 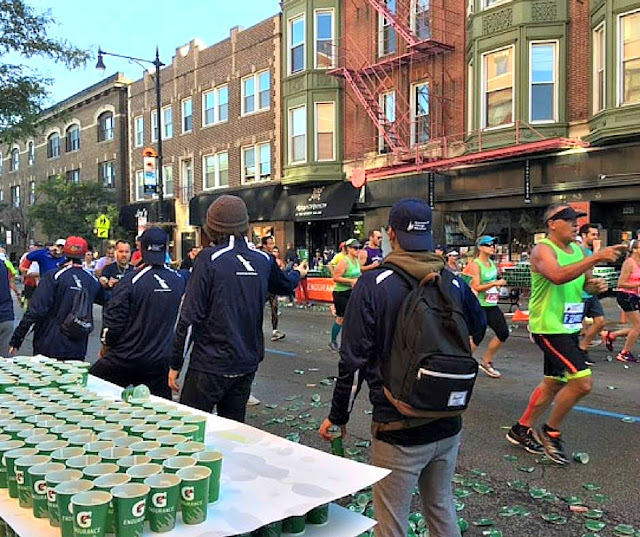 one of the main water stations is by Nettelhorst School
photo - Bank of America Chicago
with testimony from the volunteers in 2015
Oh, by the way, registration begins in April. 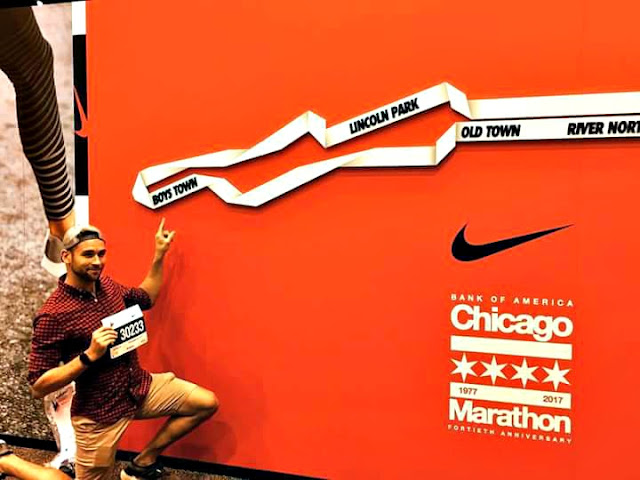 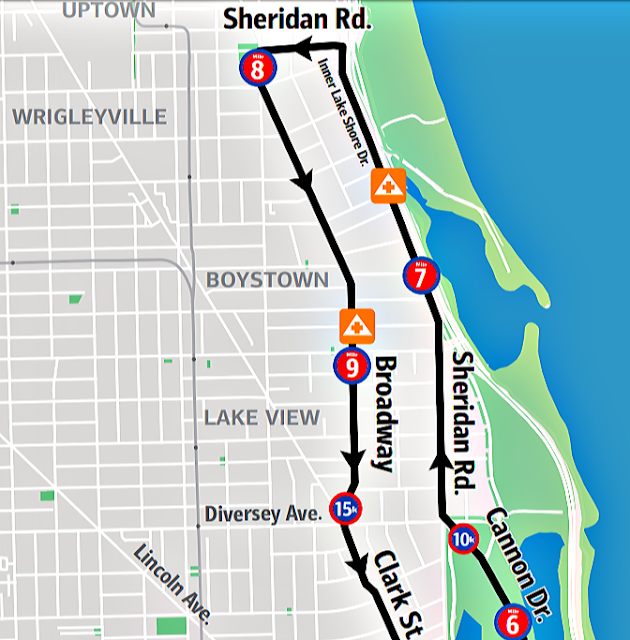 the course turn on Sheridan Road this year 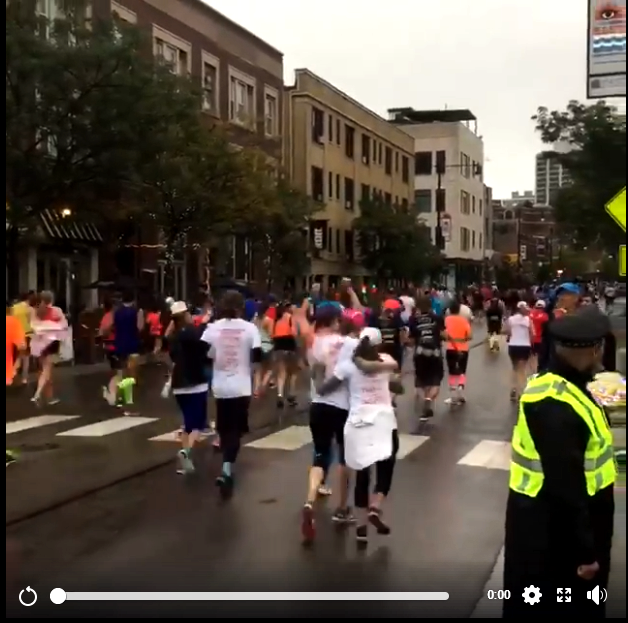 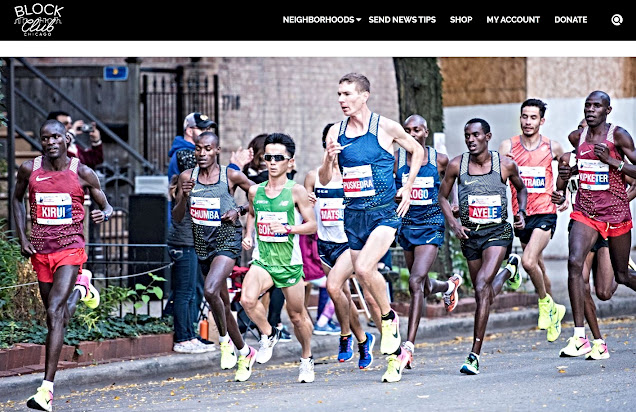 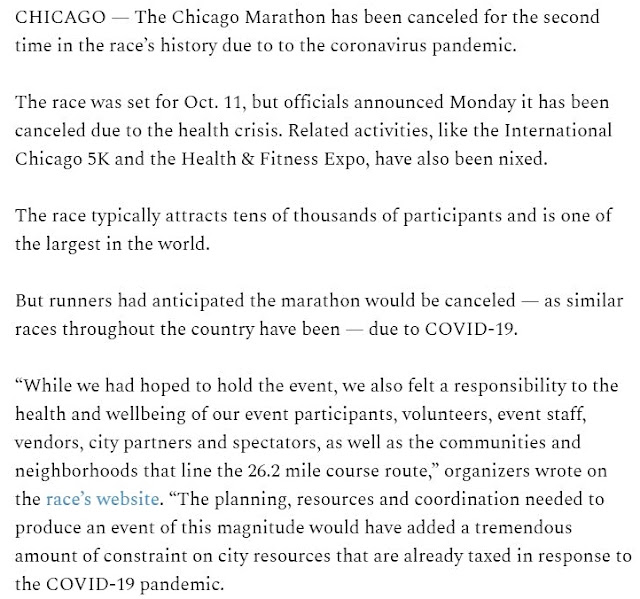 Bike the Drive
a route through Lake View by the lake 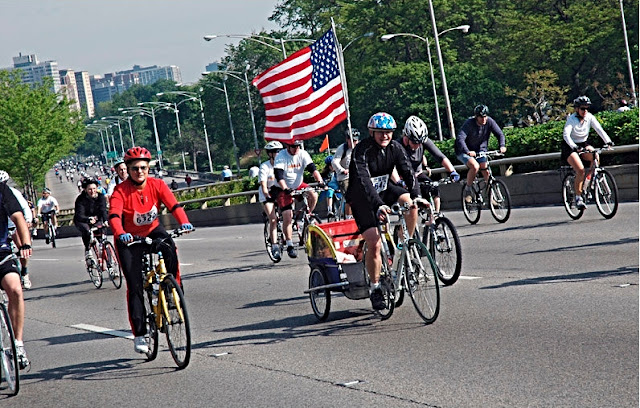 ‘Bike the Drive or Fifth Third Bike the Drive is a recreational, non-competitive bicycle ride held each year in Chicago. Lake Shore Drive is cleared of motor vehicle traffic and opened exclusively to bicyclists for several hours beginning at dawn.  Since 2004, Bike the Drive has been held on the Sunday of Memorial Day weekend. In 2006, an estimated 20,000 riders participated in the event.

Currently, the event is sponsored by Fifth Third Bank and branded as Fifth Third Bike the Drive; it was previously sponsored by MB Financial Bank from 2010-2018 and prior to 2010, was sponsored by Bank of America. Bike the Drive was launched by the Chicagoland Bicycle Federation in 2002 to raise funds for programs to expand the Chicago area's bicycle transportation network, promote bicycling as a mode of transportation, improve bicycling conditions and traffic safety, and provide bicyclists with a variety of resources and support. The route extends nearly the entire length of the famous roadway, from 57th Street on the South Side to Bryn Mawr Avenue on the North Side. The maximum route length is 30 miles (48 km), with riders beginning at Grant Park, going to the south and north extremes, and then returning to the starting point. Rest areas with refreshments and repair services are located at the north and south ends of the route, as well as the starting point. In addition, volunteers riding with the participants and stationed along the route offer assistance to riders. A festival in Grant Park follows the event, and includes music, food, cycling-related activities, and vendors and exhibitors.’ Wikipedia 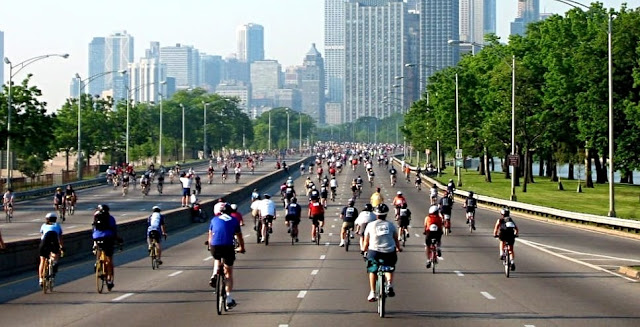 No Post Notes
Important Note:
These posts are exclusively used for educational purposes. I do not wish to gain monetary profit from this blog nor should anyone else without permission for the original source - thanks!