The Community Area of Lake View

Lake View
is one of the 77
Community vs a Neighborhood
This post tells about how 'community areas' were established by academics on the behalf of the City of Chicago.  Community Areas are fix entities adopted by the City of Chicago by 1930. Neighborhoods on the other hand are fluid areas that are located within the community itself. In order words, neighborhoods can come and go based on a real estate marketing idea of the day but community areas will always remain as part of the fabric of Chicago until the City Council votes for another one.
map - Best Chicago Properties 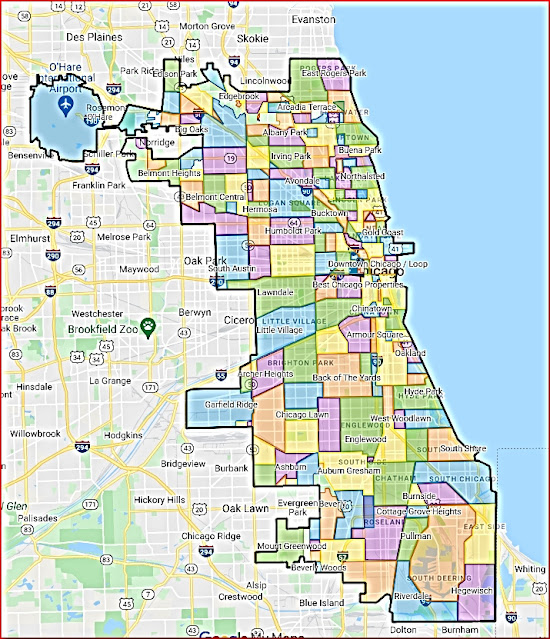 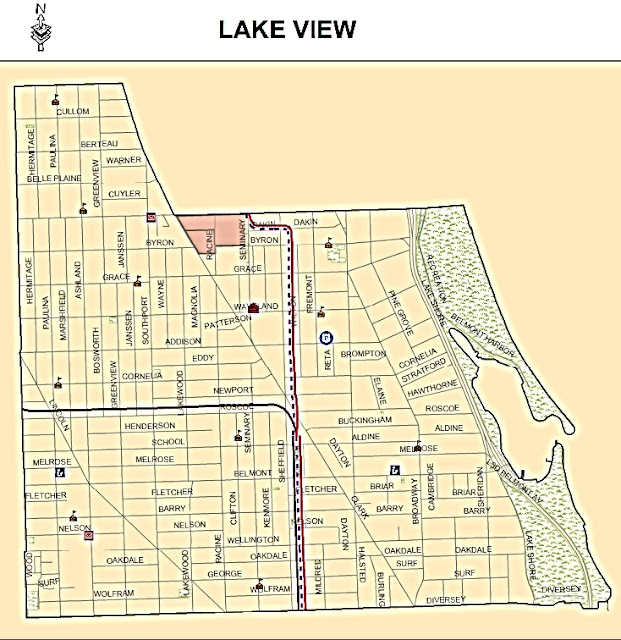 After the annexation of the City of Lake View in 1889 until the late 1920's the former city was referred as the District of Lake View. By 1930, 'community areas' were established by the Chicago City Council. Lake View's geographic area was reduced to its current size as one of original 75 neighborhoods in Chicago
- two more were formed later in that century.
A New City Model
of the Early 20th Century 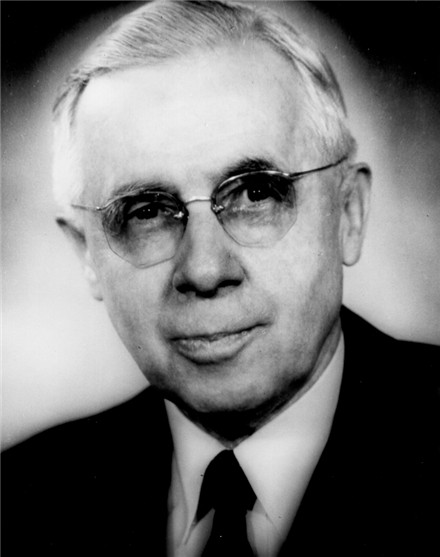 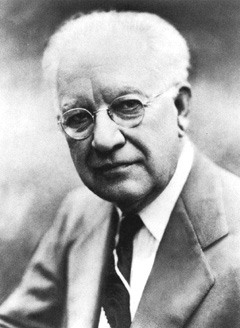 Robert Park asserted that the city represented a new type of community and, due to its large size, was comprised of many smaller communities. The sociology students devoted much of their research effort to the exploration of these smaller communities. Ernest Burgess spent decades looking for a statistical basis for these local communities. The material at hand was statistics for city blocks that came from the decennial U.S. Census. The census aggregated those statistics to City Wards. Wards were not useful sociological units; municipal government could re-draw ward boundaries from time to time and furthermore, wards did not correspond with people's communities. Burgess cooperated with the U.S Census Bureau as they created Census Tracts, approximating neighborhoods. Using these new units, Burgess and the students explored the city looking for the boundaries of local areas. Eventually they divided Chicago into 75 Community Areas, each with its own name. Over the years one of those areas was divided into two and O'Hare International Airport was added to the city so now there are 77 Community Areas. These areas have been absorbed into the city's traditions, so that now they are used in real estate marketing, city administration, journalism, as well as in social research. Demography, the study of population, was emerging as a new science in the decade of the 1920s. Some population facts came from the decennial U.S. Census and others from Chicago's Board of Health. Chicago school sociologists used elementary population statistics such as birth and death rates as tools with which to describe and analyze local communities. - University of Chicago Library

Zone I: Central Business District (called the "loop" in Chicago) where most of the tertiary employment is located and where the urban transport infrastructure is converging, making this zone the most accessible.
Zone II: Immediately adjacent to the CBD a zone where many industrial activities locate to take advantage of nearby labor and markets. Further, most transport terminals, namely port sites and rail yards, are located adjacent to the central area.
Zone III: This zone is gradually been reconverted to other uses by expanding manufacturing / industrial activities. It contains the poorest segment of the urban population, notably first generation immigrants living, in the lowest housing conditions.
Zone IV: Residential zone dominated by the working class and those who were able to move away from the previous zone (often second generation immigrants). This zone has the advantage of being located near the major zones of employment (I and II) and thus represents a low cost location for the working class.
Zone V: Represents higher quality housing linked with longer commuting costs.
Zone VI: Mainly high class and expensive housing in a rural, suburbanized, setting. The commuting costs are the highest. Prior to mass diffusion of the automobile (1930's), most of these settlements were located next to rail stations. 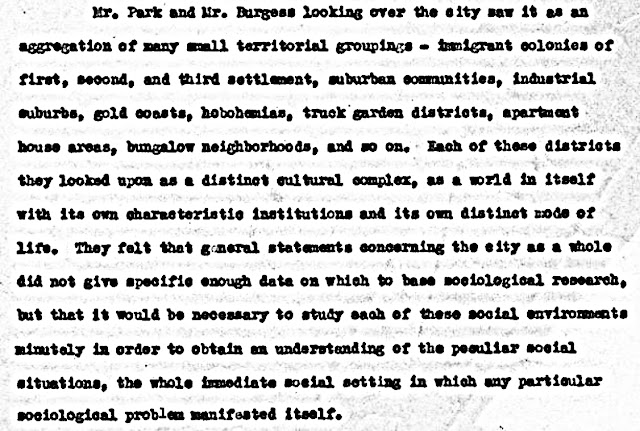 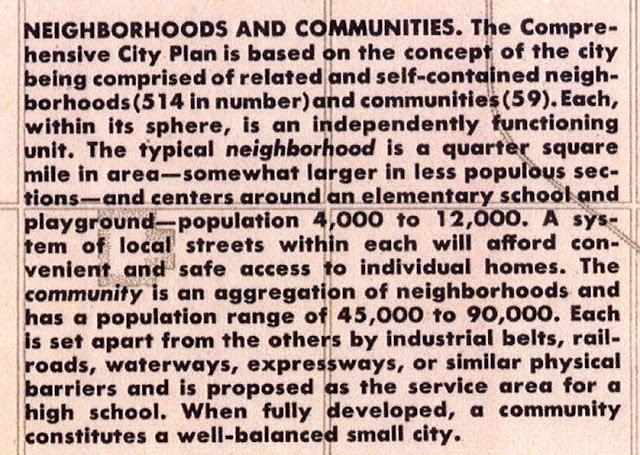 and based on the 1930 census map
X marks Lake View 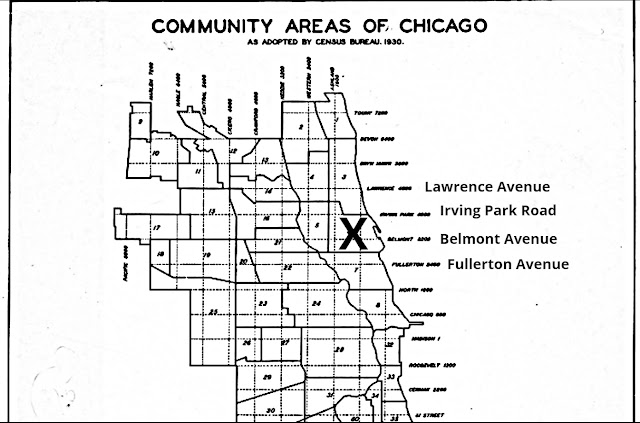 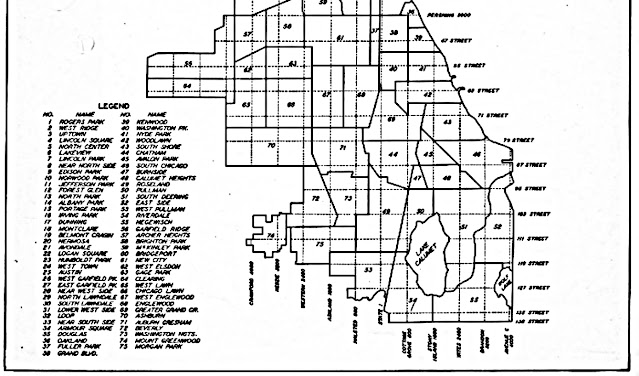 Another View of It
The Encyclopedia of Chicago
Chicago Community Areas were designed in the late 1920's by University of Chicago sociologists conducting urban research. These zones represented moderately a coherent social character across urban space at this generalized geographical scale. These so-called “community areas” have been widely used ever since as a convenient means of summarizing social and physical features of spatial units smaller than the city as a whole, with stable boundaries for the compilation of census data. From the beginning they only unevenly reflected the actual experience of community within the spaces, and over time many of them have become even less indicative of the perceptions of their residents, whose characteristics have shifted considerably due to migration. As ossified/rigid zones, they capture neither individual community identity nor the territorial reality of social groups. They still remain useful, however, as subdivisions of city space that may allow studies of change over time due to their fix boundaries.

The Naming the Community
of Lake View
According to these 1928 Chicago Daily Tribune articles
Lake View could have had another name!
Read the following 2 1928 articles 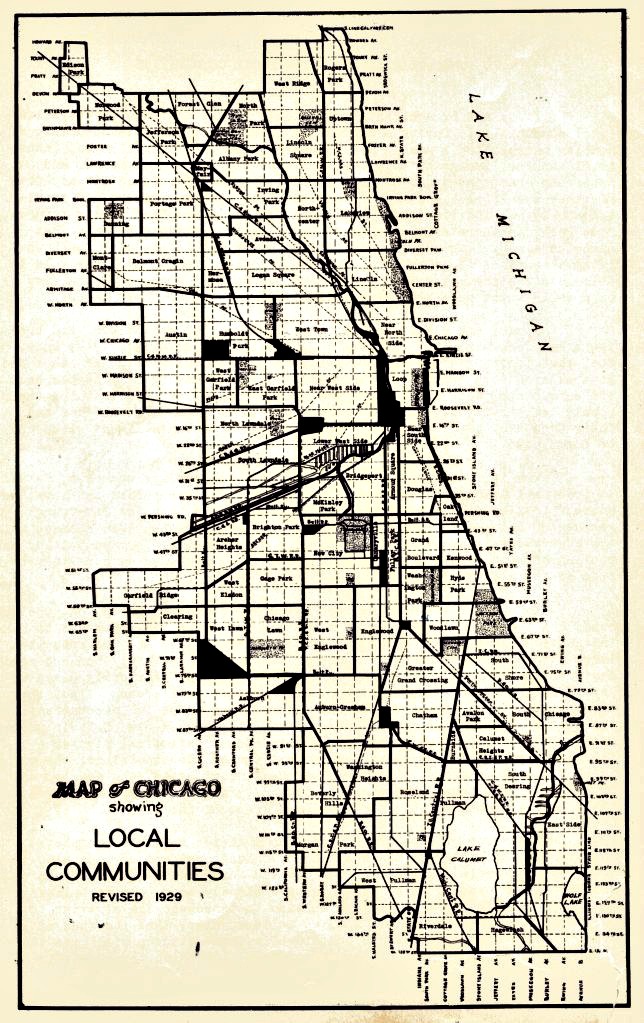 Neighborhood associations and block clubs - my next post, as well as chambers of commerce can oversee the growth and development of their own communities like Lake View and ideally form informational partnerships between city planners, developers, and residents, hence balance to the difference between social welfare of all from the private profit of a few.
Commercial Zoning Reform
in 1955

The Father of  'Community Area' Centrism:
Alderman Dick Simpson
Dick Simpson tried to localize government to particular community area and tried to establish a citizen assembly where by citzens decisions would be voiced, supported, and delivered by their alderman to the city council. 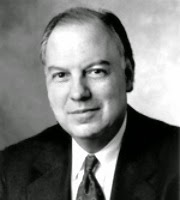 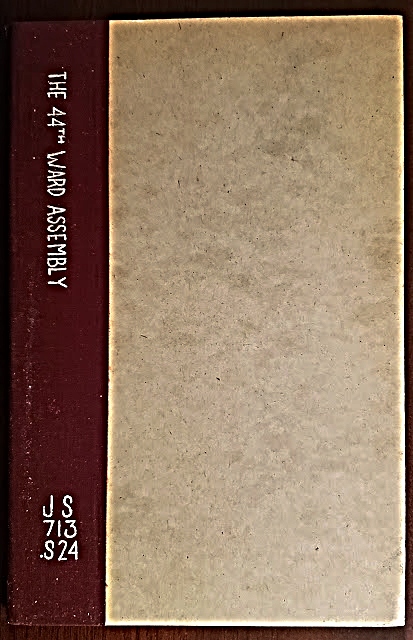 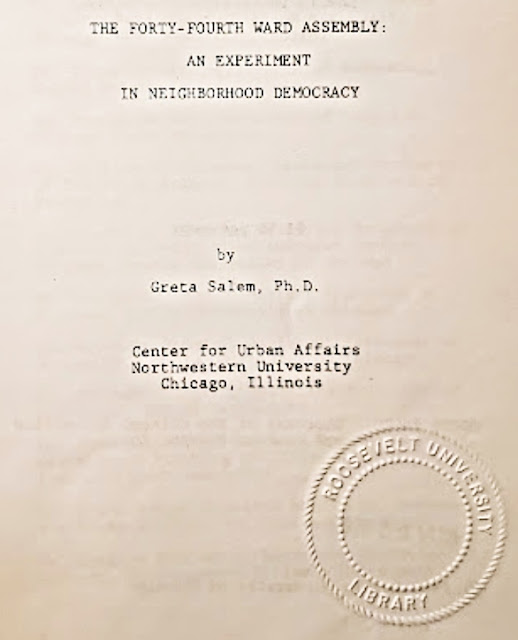 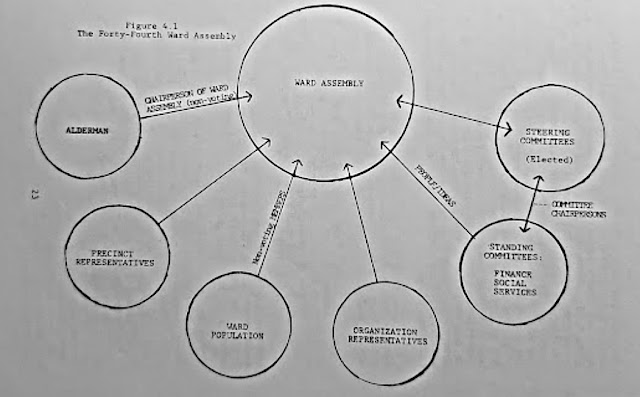 His Story
part of my collection 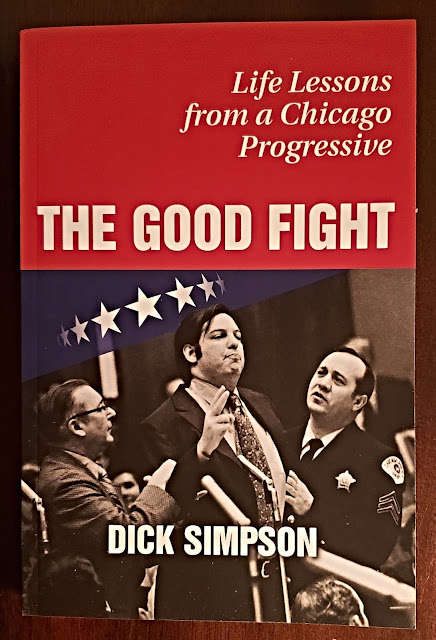 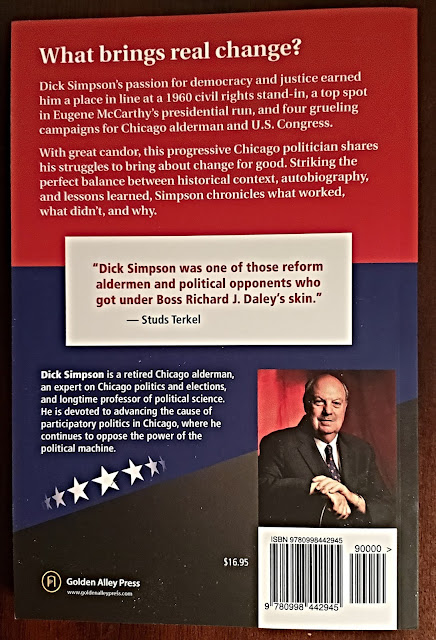 The Neighborhoods
and it's Corridors Within: 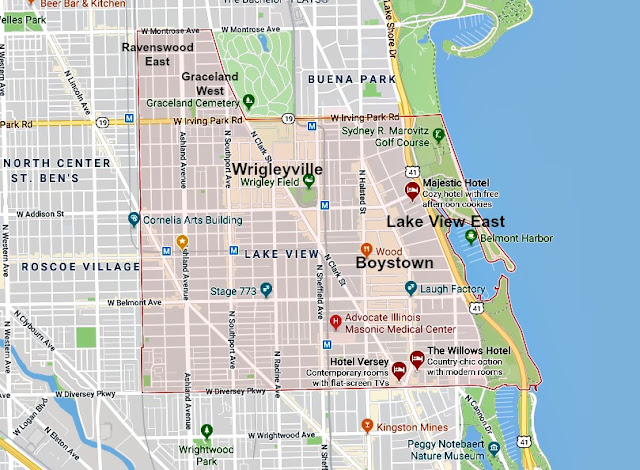 The Community of Lake View have some popular neighborhoods within its borders two of which known national and international let alone within the City of Chicago. Most everyone has heard of Wrigleyville due the "friendly confines" of Wrigley Field. Wrigleyville is most likely a real esate marketer's idea for an area surrounding Wrigley Field probably hatched during the 1980's. Whatever happens to Wrigley Field happens to the residents surouning the baseball park. 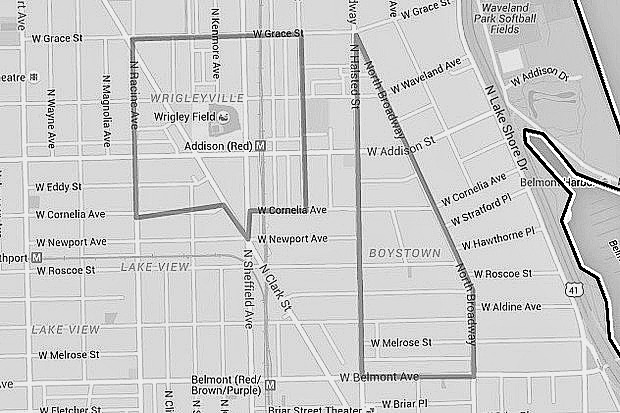 Map of Wrigleyille & Boystown/North Halsted
photo - DNAinfo
Next, in my opinion, is Boystown/North Halsted. This small enclave is international known as the home of the LBGTQ+ community. It was once respectfully referred to by the 1980's as the 'gay ghetto'. It was widely known in the Mid-West as a 'safe place' to live and work in once domiant homophohic world.
The neighborhood of Lake View East must have been another real estate marketer's idea to separate incomes and class of the population in this area from the rest of Lake View. In the late 1960's to the early 1980's this area was known as New Town more than likely another real estate idea that failed to produce its desired effect - diversity.  When I moved into Lake View East I was told by my building engineer, who moved there with his family in the mid 1970's, that if it was not for a grocey store called Treasure Island very few residents would cross Broadway to the west for fear of gangs and deemly lighted streets. 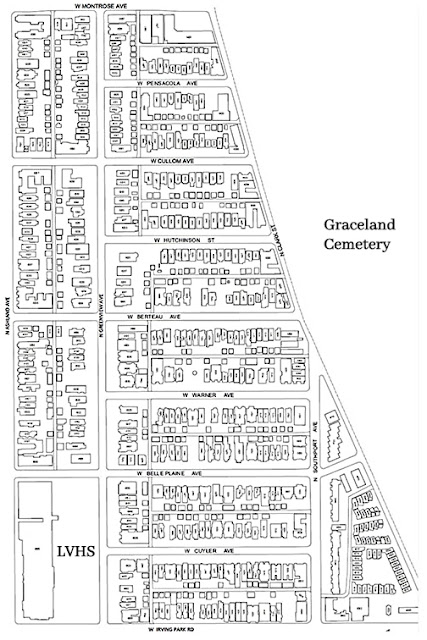 the neighborhood of Graceland West
West of Graceland West and west of Ashland Avenue to the Ravenswood Avenue is South-East Ravenswood. While the nieghborhood has more or less has the same character as its geographic neighbor such as large property lots and houses this neighborhood appears to lack the strong community spirit of its neighbor. This area gets its name from the former township/city of Lake View. The former Community of Ravenswood, which should have been included in the City of Chicago's 77 communities, was a vibrant entity in the former township/city only to be carved up into small areas such as the Community of Lincoln Square.

Other areas within Lake View worth mentioning are the 'corridors'.
The Southport (Avenue) Corridor has its own online news outlet and is the home of the Music Box and Mercury theaters.
Ravenswood Industrial Corridor spans the communities of Lake View, North Central, and Uptown currently referred to as Printer's Row 2.0. due to its strong niche of small, independent, and local manufacturers. The Sheridan Road Corridor is the most recent invention by developers and probably aided by the Roscoe Village/Lake View Chamber of Commerce. Its presence within the Lake View landscapge is still (2022) being realized to this blogger.
Moving to a
Particular Neighborhood?
These next two sections or this post is my 'connector' to my next post about Neighborhood Associations in Lake View

There are the five ways someone can get to know and get comfortable with neighborhood you wish to visit or resident.  According to Yo Chicago, a potential resident can do the following:

1. Walk around. This may sound pretty basic, but it is essential. Go out at different times of day and night. In the morning you will meet the dog walkers and commuters. In the day (especially in the summer) you will see the families out and about. At night, a walk will give you the feel for the neighborhood after dark. If you are a dog owner, walking around at night is a critical test. When you encounter people, ask them about the neighborhood: how long they have lived there, where did they move from, if they ever moved would they stay or move to a different area and why?

2. Eat in local restaurants. Find the place the neighbors go for breakfast, lunch or dinner and go there. Sit at the counter and talk to people. Find the best place for dinner and eat at the bar. Ask about neighborhood things to do, schools, shopping, gyms, whatever you are into.

3. Do the numbers. Are you planning to stay in the neighborhood for 3 years, 5 years, 10 years? What is the appreciation outlook? If you moved would it make sense to keep the home and rent it? What are the rents and the rental price trend for that neighborhood? Are you comfortable with the value you are getting and the prospects for being able to sell it when you want to?

4. Do the commute. Make sure to test drive the commute to work or school at the time you typically go. Test a few different routes. There is nothing like spoiling the feel of a new home than sitting in traffic forever to get there.

5. Surf the web. There are tons of sites that can help you investigate activities, crime statistics and demographics. 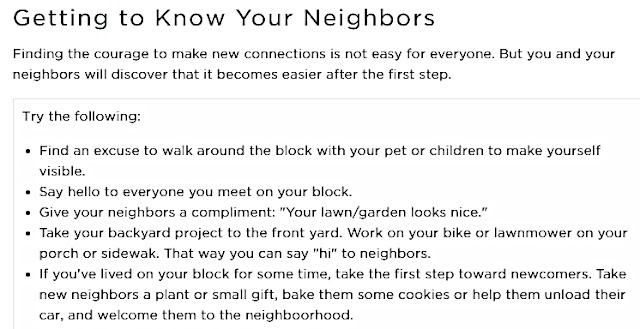 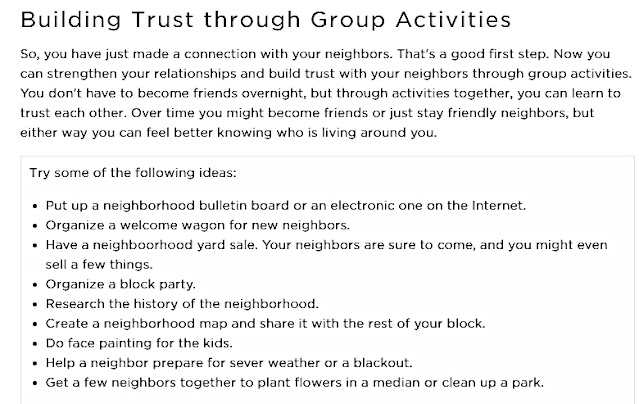 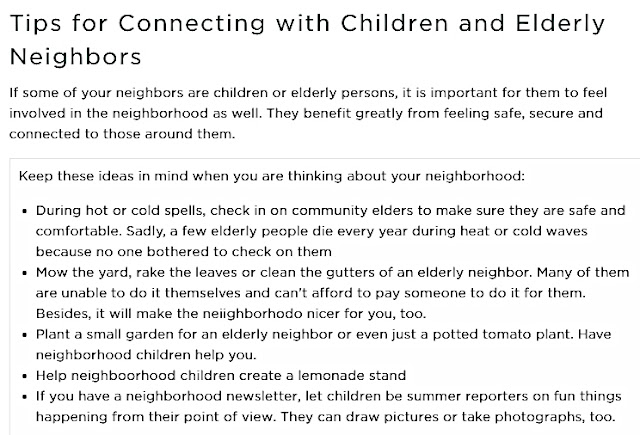 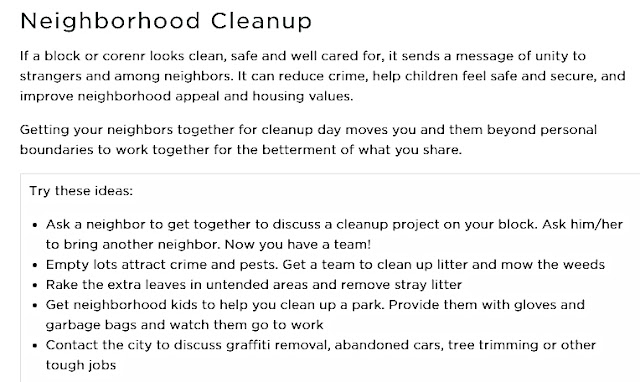 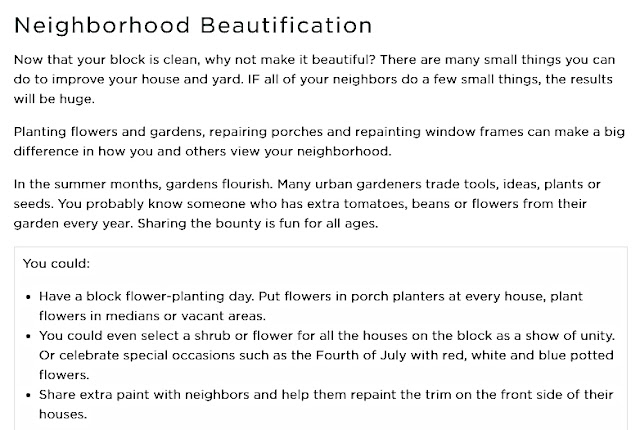 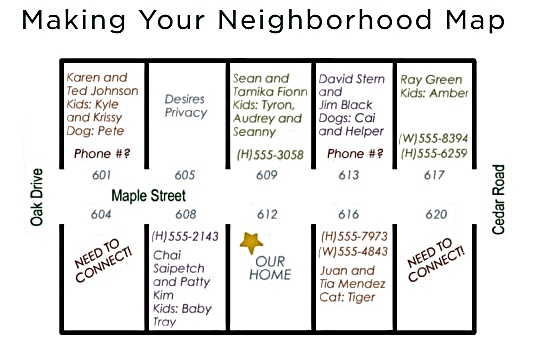 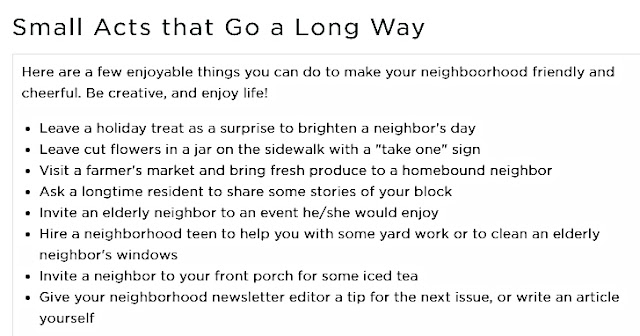 Post Note
This a good starter read on the 77 communities of Chicago.
This book is part of my collection. 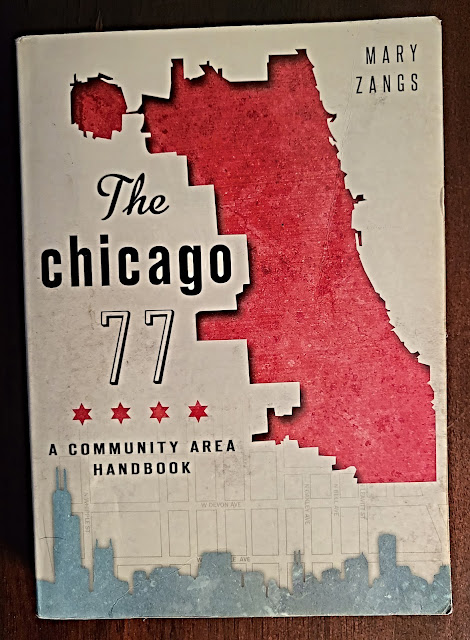 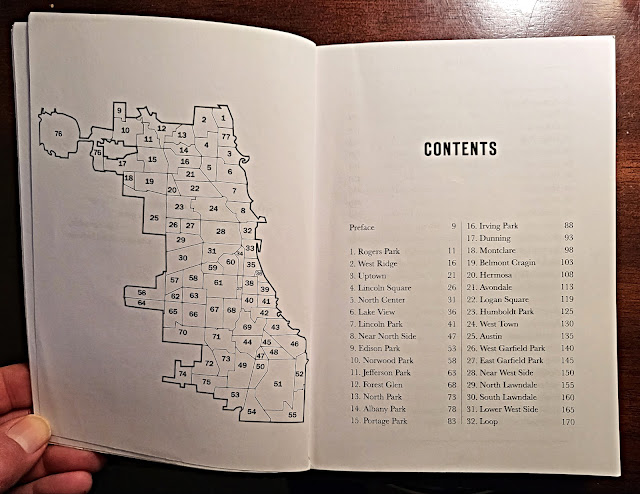 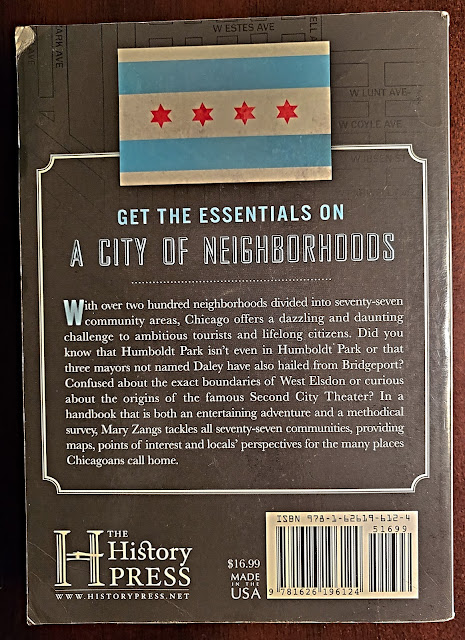 Important Note:
These posts are exclusively used for educational purposes. I do not wish to gain monetary profit from this blog nor should anyone else without permission for the original source - thanks!